Mythbusters: That Dog Needs to be Put in His Place! 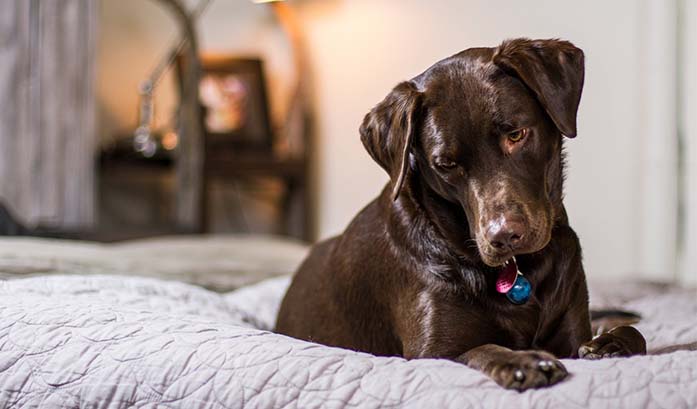 Here are some signs that some people take to mean a dog doesn’t know his place:

Nudging to be petted

What if your dog just likes your attention?

Guarding and being possessive of food, toys, and people

Why would an animal have thoughts about what’s your stuff? Does it make any sense that an animal would think they only have what we give them? That’s pretty complicated thinking for a dog!

Barking at people and animals

Yet we also want dogs to bark to warn us. How does a dog magically know when we want them to bark or when we don’t?

Not doing what we ask them to do

What if the dog doesn’t know what you want? What if he’s not motivated? Why should your dog listen to you? Would you go to work and not get paid? Can you do a job that you haven’t been fully trained in?

Jumping up on people

Dogs love to be near their human’s face. This is their motivation to jump up. It doesn’t mean they’re plotting world domination! If you don’t want your dog jumping up, you can teach them to keep their feet on the floor. If you’re not bothered by them jumping up, it doesn’t mean you’re letting them become the CEO of your household!

Begging at the table

If you feed your dog from the table, your dog will do more of it. Dogs do what works! Just like any other animal.

Pulling on the leash

What if your dog simply wants to see and smell things? There’s a lot of interesting things out in the world!

What if I told you that none of the above has anything to with a dog not knowing his place? You can change any dog behavior you want and never even think about hierarchy.

Dogs Are Not Hierarchical Pack Animals (and They’re Not Plotting Household Domination!)

The American Veterinary Society of Animal Behavior (AVSAB) has issued a Position Statement on the Use of Dominance Theory in Behavior Modification of Animals.

Dominance is defined as a relationship between individual animals that is established by force/aggression and submission, to determine who has priority access to multiple resources such as food, preferred resting spots, and mates (Bernstein 1981; Drews 1993). Most undesirable behaviors in our pets are not related to priority access to resources; rather, they are due to accidental rewarding of the undesirable behavior.

Some people believe that dogs are constantly striving to become the boss or the alpha dog and it’s important that humans teach them that their place is at the bottom of the hierarchy, or at least below the humans in the household. – AVSAB Position Statement

Some people believe that dogs are constantly striving to become the boss or the alpha dog and it’s important that humans teach them that their place is at the bottom of the hierarchy, or at least below the humans in the household.

Some trainers will recommend making dogs wait for the human to go through the door first. Or never allow them on the furniture, lest being physically higher, fills their heads with notions of being the boss! Or don’t feed the dog when you’re at the dinner table. They will tell you that if you let the dog sleep in the same bed as you, the dog will be filled with ideas of being at your level.

In reality, these things are not going to magically solve behavior problems. Nor will they change your relationship with your dog. If you want your dog with you on the couch, it’s ok! If you don’t want your dog on the couch, that’s fine too. Either choice is up to your own preferences.

Kathy Sdao wrote one of my favorite books on dog training, Plenty in Life is Free: Reflection on Dogs, Training, and Finding Grace. In an interview, she wrote:

People should learn how to be a skilled, generous, creative “feeder.” That is, they should understand and embrace the fact that their main role, if they want to be a great trainer, is to reinforce repeatedly any dog behaviors they want to see more of. This reinforcement is a much greater priority than being a strict leader, a “commander-in-chief.” — Kathy Sdao

If your dog is pestering you, lacks manners, or is disobedient or engaging in behaviors that are unsafe, find a force-free, certified dog trainer. And if there’s not one in your area, you can always contact me.