Today’s post is from Nickala Squire, is an honours graduate of the prestigious Academy for Dog Trainers and founder of Carefree Canine in Grand Forks, North Dakota. I’m so happy to host her blog post about her fearful dog, Sango. 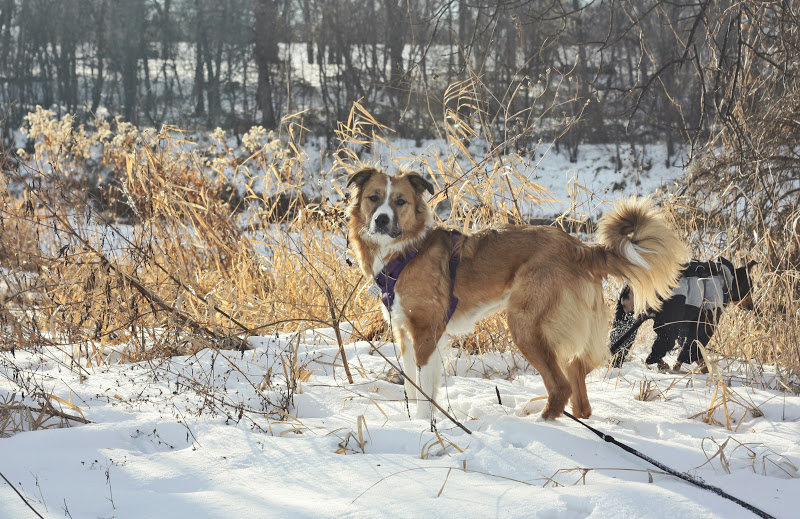 After mourning the loss of my great pyrenees I began to yearn for the presence of another giant, preferably a livestock guardian breed. So I went looking for a puppy to rescue; this is how I found Sango.

Sango is a fearful dog 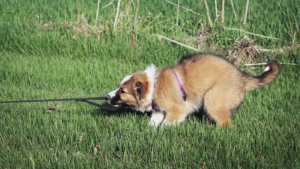 Sango turned out more of a mutt than a pyrenees cross according to her DNA test, but like her predecessor, she has a way of capturing people’s hearts. She has the calm patience of a pyrenees, the sappy sweet snuggliness of a golden retriever, the work ethic of a border collie, and the complex coat color and texture of a rough collie. She’s a fierce, well structured and proficient huntress with a powerful bark, but so gentle she can assist in the socialization of 1lb foster kittens or skittish puppies. There’s one more defining trait of Sango. Her best kept not-at-all-a-secret: Sango is profoundly fearful.


She was never abused or mistreated

Nothing we would consider traumatic happened to her. Due to a combination of genetics, early life experiences including lack of early socialization (pre 8-week) and potentially mom’s stress in utero, late socialization was not enough to help Sango’s brain develop in a way that allows her to feel safe naturally.

She was fearful even as a young puppy

I met her huddled at the back of her crate with her sisters, terrified after their first ever car trip. After settling in at home, it was apparent at 9 weeks old she was more shy than other puppies. She didn’t want to approach new things. She did actively approach people, dogs and cats but would tuck her tail, turn to the side, crouch, piddle in place, pin her ears back and grimace. These are all gestures to say “I’m not a threat, please don’t hurt me.” She would then act relieved when they turned out to be friendly with shake offs and zoomies. Many puppies will portray some of these but the frequency and consistency with which Sango portrayed them was concerning as well as her delayed warm up time to individuals.

At 5 months of age, her fears were growing

By 5 months old she startled easily at certain noises, ran away from disappointed tones or upset faces. She loved her friends but new people and dogs were still a challenge for her, despite only ever being met with kindness, patience and treats by countless individuals. Inanimate objects that wobbled or tilted terrified her. Noisy machinery scared her. Things that touched her like collars and harnesses would make her run away on sight or alternatively, freeze in a cowering position as if all she could focus on was trying to survive them being put on. Even a leash brushing past her back on a walk would cause her to flinch and jump away as if bitten. Certain forms of invasive handling or even play with less familiar dogs would occasionally cause her to yelp in fear.

By 8 months old she was no longer merely reacting to triggers but worrying when nothing was happening. Walking her anywhere remotely populated was torture, for her. Her quality of life was slipping away and at the same time, my ability to work with her still semi-malleable puppy brain.

She was treated with counter-conditioning and desensitization

From day one, I utilized counter conditioning and when possible, desensitization. This is a deceptively simple sounding process in which we arrange things that cause dogs fear to predict wonderful outcomes. When possible, we lower the intensity of those things to make them easier to cope with in the moment and easier to conquer long term. Think, a cartoon picture of a spider earning an arachnophobe $100 dollars, then a realistic one, etc. Over time, a knee jerk positive emotional response is built and if the process is done correctly, the subject no longer feels fear in the real life scenario. Sounds brilliant doesn’t it? It is. It’s a well proven training method that has stood the test of time.

But she still had so many triggers, and the they were growing

The catch is, with a fearful dog like Sango things can get complicated. First of all, she had a lot of triggers. How do you find time in the day to work on all of them? Without time constraints, a puppy can only eat so much! Play and praise were great, but not motivating enough for Sango in the face of true fear. The second is that rather than getting used to more mild triggers of fear or anxiety, some dogs will “sensitize” aka, their fear worsens each time they’re exposed to their triggers and the triggering situation may generalize to similar ones. This is exactly what was happening to Sango, rapidly:

The baby gate fell over? Now she’s terrified of baby gates. Didn’t work on it in time? Now she’s scared of any moving pens, gates, or doors that resemble either.

Saw a new type of hat that freaked her out? Well now she’s afraid of all people in hats. Now all people from demographics who often wear hats.

Medications have made a big difference

You can see from this non-exhaustive list how quickly things spiral out of control despite hours of training every single day. Thank goodness that as a dog trainer I knew enough to talk to my vet about medication, and I thank my lucky stars that my vet is knowledgeable and cares enough to act on making dogs feel emotionally well. So, enter medication. We started prozac, a daily medication that has a seemingly subtle constant effect. No sedation, no drastic changes in personality. Just the ability to feel safe more often and build new lasting pathways in the brain. This means when she does get scared, Sango can recover and relax in a matter of minutes rather than remaining scared or worried for hours. It takes more to scare her, for example a stranger must pay attention to and loom over or try to touch Sango for a panic reaction to occur, rather than seeing them at a distance. It also prevents her from constantly worrying when nothing scary is happening. Medication made a huge difference by giving me realistic starting points for training but more importantly: it allows her to enjoy life. 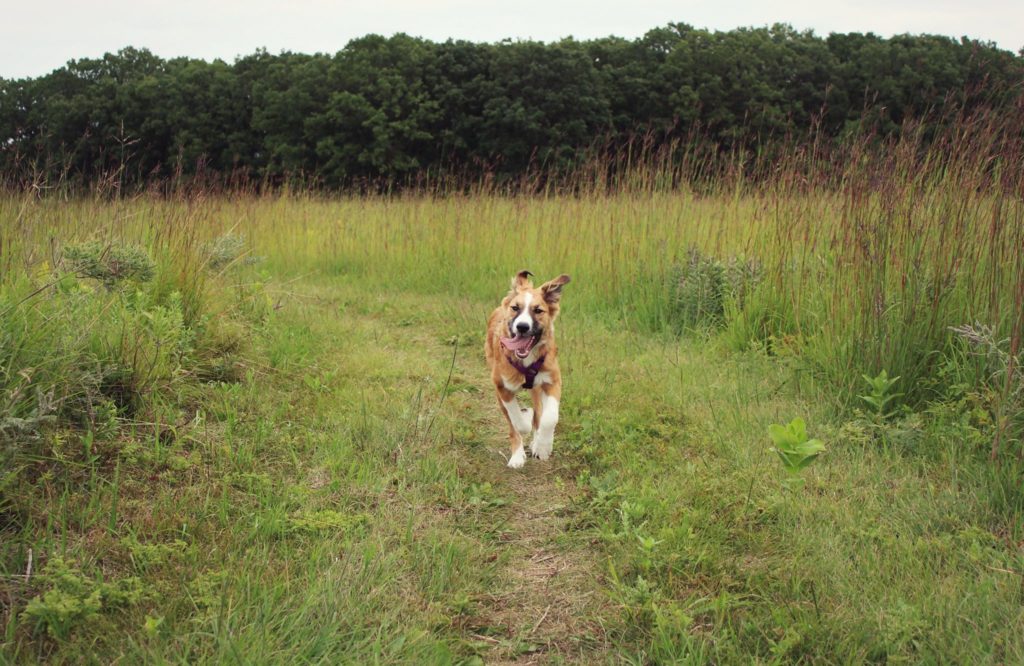 A journey of healing

At almost 2 years old now, Sango still has her ups and downs. She’s had regressions and she’s had major breakthroughs. She still gets training to make her feel safe and she is still medicated, she will likely need both for her entire life. It’s our lifestyle now. Keep her feeling safe, teach her that scary events predict wonderful things. Teach her how to navigate our confusing civilized world. Help her build confidence in a variety of situations. Baby steps, together.

Sango is an amazing dog. I wouldn’t trade her for the world and I don’t regret adopting her. But this story is not meant to glorify owning a fearful dog. On the contrary, I loathe that fearful dogs in all their suffering, exist. I loathe that there are mass breeding facilities pumping out puppy after puppy to be sold first come first serve at pet stores, who we know are likely to develop fear and anxiety based behavior problems. I loathe that anyone can become a breeder with no knowledge of dog behavior and how it’s passed through genetics and early life experiences, allowing the spread of fearful, anxious, distrustful dispositions. I loathe that the majority of rescues and shelters out there, even those with the best of intentions, squander the precious time they have with puppies that contributes to their likelihood of developing fear. I loathe that veterinarians, at least in past years, were not taught low stress handling skills and may scruff, pin, yell at, etc, puppies and adult dogs. Finally, I loathe that many professional dog trainers cause their clients to endure a lifetime of work and heartbreak because they weren’t required to educate themselves on the science behind how animals learn.

Owning a fearful dog comes with a lot of compromise, frustration, and tears. Some of us have to reshape our entire lives to protect our best friends from emotional pain on a daily basis. Sometimes, there aren’t happy endings like Sango’s. Even when there is a happy ending, no dog deserves to suffer through a journey just to feel safe. We have the knowledge and the ability to do better at preventing fear in dogs. Isn’t it about time to use it?