My Dog is Old and He’s Losing Who He Is: Canine Cognitive Dysfunction 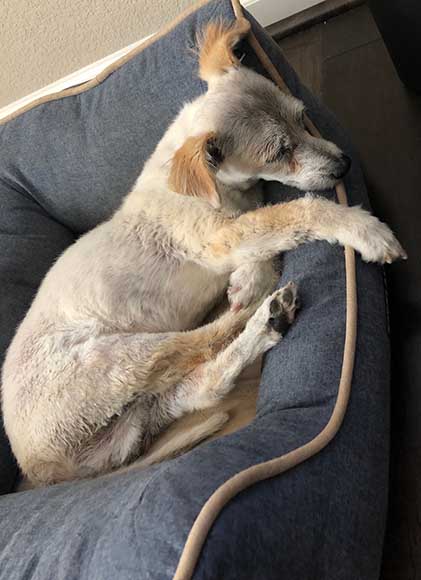 This is a recent video of Skippy. You can see that he doesn’t look very oriented. He stares off into space. It’s not easy for him to settle.

One of the hardest things about loving dogs, is watching them grow old.

This post is different than my usual. It’s personal because I’m watching my dog Skippy, deteriorate,

Skippy has never been the smartest or most switched on dog. He often reminded me of Simple Dog from Hyperbole and a Half. But he’s fierce and weird and I love him to bits.

He’s at least 16 years-old and has been in my life for more than 12 years now. He’s mostly blind and deaf and when he started losing cognitive skills, it was hard to tell how much was from sensory deficits vs. his brain. But in recent weeks, it’s more clear that it’s all of the above.

Questions like, “is he suffering?”, and “how do I know when it’s time” are weighing heavily lately.

His veteriarian has already indicated that she will support any answer yes or no.

How can you weigh such things?

Lab work is good. His labs are fine for an old guy. There’s no sign of organ failure.

His heart keeps going. He has a heart murmur. But his ticker keep ticking.

Pain is well managed. He is very arthritic, yet doesn’t seem to be in pain very often and when he is, it’s readily managed with NSAIDs.

He plays!!! Sometimes, he still plays. He’s so awkward that his play attempts trigger aggressive replies from the other dogs in the household. So we play together when the other dogs aren’t around. He does a play bow. I slap the ground. He dances a bit. And then he’s tired and done. But this is a near nightly ritual for us.

He’s often happy. He is happy and excited when it’s time for meals or treats. He dances around and can even be quite demanding. It’s not a lesser version of his younger self. It’s all of his bad-assery. He roars to let the world know he’s alive and in his own mind, in those moments, I’m sure he feels like a puppy again.

He has quality of life in so many ways.

Managing him is increasingly hard.

Getting into other dog’s space. His bumbling around upsets the other dogs. He doesn’t see them, so he bumps into them. Or he wants a bed they’re already in and he tries to enter and then tell him to buzz off, but he can’t see or hear their signals.

Resource guarding and fight risk. He developed resource guarding in the last 18 months. It took awhile for me to figure out what was going on because sometimes, the resources may be things he thinks are there…and they aren’t. But with repeated episodes, it became clear that he’s sometimes guarding me and other times guarding food. He aggresses towards the younger dogs who are half his age and up to twice his size. We’ve had some full on brawls that have been worrisome because he will always lose.

Incontinence. He started urinating in his crate a few weeks ago, every now and then. In such a short time, it seems to have become a nightly occurrence. He’s also had some fecal incontinence.

Anxiety. Sometimes he paces at night. He has a hard time settling in his crate despite sleeping in it for most of his life. He wants out or he’s restless. His veterinarian prescribed some Trazadone but i’m not sure if it’s a great answer.

Confusion. Sometimes he stared off into the middle distance. On rare occasion, he gets stuck in a corner. Or he stands on the hinge side of the door expecting it to open. It’s hard to know how much is sensory deficit and in the end, it doesn’t matter. When he’s confuse, it’s pitiful.

Falls. We have stairs. Skippy doesn’t like being picked up and carried. But about 6 months ago, he started taking occasional tumbles down the stairs. He wasn’t injured but it scared him, as it would anybody. He’s ok navigating up, but I can’t let him walk down anymore.

Management Strategies for Dogs with Dementia

While you actually can teach an old dog new tricks, Skippy isn’t going to learn new things. But there’s a lot I can do to manage him despite his having canine cognitive dysfunction.

Is My Dog Suffering?

It’s hard to know. Is confusion the same as suffering? Is being out of it a blessing or is it frightening for him?

For now, I try to make sure he has the best days possible. I also try to have some daily time with him where we can enjoy each other’s quiet company.

For help and support for your dog with your dog with Canine Cognitive Dysfunction, Eileen Anderson has put together some wonderful information and resources.